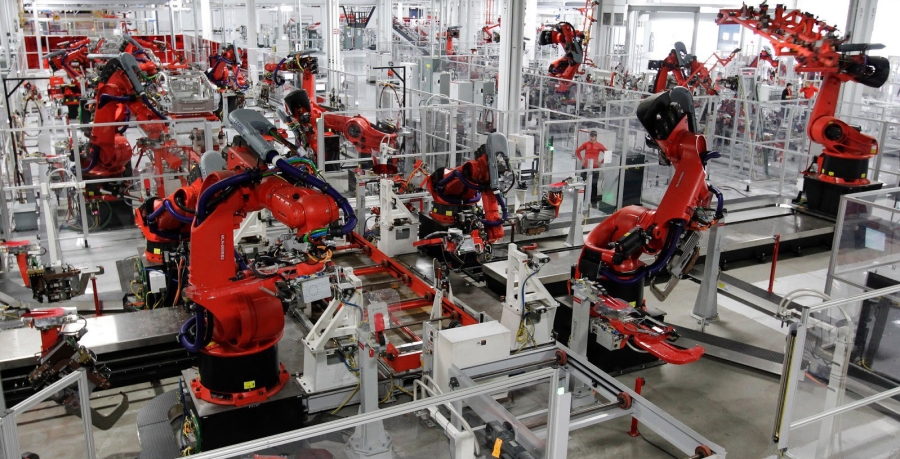 In the past few years, journalists, scientists, and tech CEOs alike have begun to sound the alarm about the disruptive effects that upcoming advancements in robotics and artificial intelligence will have on the job market. The introduction of self-driving cars alone will result in over 4 million job losses over the next two decades, as truckers and bus drivers are replaced by autonomous vehicles. Robots and computer kiosks are already replacing jobs in food service and retail, and machine learning algorithms are even starting to replace skilled white-collar jobs, like accountants, middle managers, and programmers. When it comes to automation, there really is no place to hide.

Of course, automation isn’t a new phenomenon— technology has led to dramatic job losses before, particularly in industries like agriculture and manufacturing. We can roughly group the history of automation into three major “waves.” 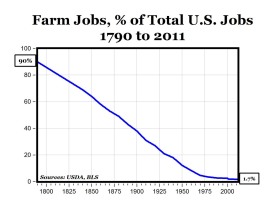 First, the Industrial Revolution led to a precipitous decline in the share of the population working on farms. For all of world history up until the 18th century, well over half the workforce was directly employed in food production. But the introduction of machinery into agriculture dramatically increased productivity, freeing up farm laborers to work in manufacturing.

The next wave came after World War II. Technological advances greatly increased the productivity of factories, which freed up industrial workers to work in new service jobs. These service jobs largely consist of mental labor, such as reading, writing, and planning; interpersonal labor, such as interacting with customers; and light physical labor that requires dexterity, such as preparing food.

The problem is that services can be automated, too. Contemporary advances in robotics and artificial intelligence are taking aim at just those skills which service jobs require: planning and pattern recognition, interacting with humans, and manipulating objects in complex and changing environments. This really will be the final wave of automation. Once machines comes to dominate the service sector, humans simply won’t have any useful skills left that can’t be done more efficiently and more cheaply by machines.

Now, many reasonable people want to hold onto the idea that humans are irreplaceable. Can machines really become as creative, intelligent, and sophisticated as human beings?

The answer to this question is yes. Science tells us that at the end of the day, humans are machines. We’re immensely complex, fleshy, biological machines, but we are machines nonetheless. There’s nothing a human can do that can’t ultimately be replicated by a machine, given enough engineering and research effort. It’s precisely the profound intelligence and creativity of human beings that allows us to understand the secrets behind our own capabilities, and design machines that can surpass us in many ways.

While machines will likely become more capable than humans in all domains by the end of this century, we won’t have to wait that long to see immense disruptions in the job market and society as a whole due to automation. So far, whenever automation has led to job losses in one sector, markets have adjusted by introducing new jobs in another sector. The problem is that we know this pattern cannot continue indefinitely. There will be a point at which the further introduction of automation technology will result in long-term net job losses for the economy as a whole.

We can call this point “peak automation.” Firms will lay off workers, and many of these workers will simply find that there is no employment to be had for them. All available job openings will require skills that they do not possess, and cannot afford to acquire. The long-term unemployed population will gradually increase, and this will in turn lead to a reduction in consumption spending and aggregate demand. Declining demand will prompt further layoffs, leading to further reductions in demand, in a downward spiral. Investor confidence will collapse, and a deep recession or depression will result.

As always, states will find that the best way to get the economy up and running again is to do Keynesian deficit spending. But fiscal stimulus alone will not solve this crisis. Unacceptably high levels of unemployment will be a recalcitrant feature of the new economy, because unskilled laborers simply will not be needed in large numbers, and there will be diminishing returns on productivity gains from adding additional skilled workers. Bringing the economy to full capacity will require more substantial state interventions into the market. This will include state-mandated reductions in the working week, expanded social programs to prop up demand, and tuition-free higher education and job training programs.

Of course, many states will be reluctant to take such left-wing measures to address the crisis— the wealthy will certainly lobby strongly against them. But countries that take a more left-wing approach will tend to economically outperform those that do nothing. And pressure from the electorate will become intense as more and more workers are laid off.

As automation continues, states will face competitive pressure to keep as much of their population as possible gainfully employed in those jobs that remain— research scientists, engineers, and managers. Demands of efficiency will favor the nationalization of the most thoroughly automated industries. Higher education will take up a very large portion of GDP, as the government tries to funnel as many workers as possible into STEM-related fields. But we must recognize that not everyone is cut out for or interested in becoming a scientist, an engineer, or a manager. The state will have to figure out what to do with the rest of the population— the people who no longer need to work.

Of course, as decent, reasonable people, we would all like to make sure that the unemployable population has all of its basic needs taken care of, rather than being left to starve on the streets. Luckily there will be a strong economic rationale for the state to do the right thing here, since it will be necessary to prop up consumer demand. We can imagine, however, that some states might opt for a much darker solution to this problem.

There is an uncomfortable truth here, though. As long as it’s necessary for some skilled workers to be employed, these workers will need to be given privileges or advantages over the unemployable population in order to incentivize them to work. We cannot count on the idea that pure altruism or a sense of national duty will sufficiently motivate the scientists, engineers, and managers of the future. This means that a new kind of class division might emerge, between those who work and are given privileges for doing so, and those who live off of the state. A caring, left-wing government should do its best to minimize the inequality between these classes and facilitate a high degree of mobility between them— while working to accelerate progress in automation in order to hasten the end of class divisions once and for all.

Why a UBI isn’t good enough

It’s striking to note that even many of the most wealthy businesspeople in the world, like Elon Musk and Richard Branson, have recognized that a radical change in the economy will be necessary in order to adapt to the next wave of automation. The most popular policy prescription is a universal basic income, a government program which would provide a livable income to every citizen regardless of employment or financial means. Most of these pro-UBI billionaires hope that this policy would allow markets and private ownership of capital to continue indefinitely— effectively a bandaid solution to adapt capitalism to an increasingly jobless world.

But there are good reasons to believe that capitalism and a UBI can’t coexist for long. Such an arrangement would likely lead to a great amount of civil unrest and social instability. Class divisions would be made much more obvious and grotesque in such a scenario, and the unemployable majority would look at their trillionaire overlords with envy and disgust. It would quickly become clear to everyone that the owners of capital are not providing anything of use to society, and are simply extracting rents at the expense of the general population.

The capitalists, on the other hand, wouldn’t approve of being taxed at high rates in order to give handouts to the unemployable. They would prefer a situation in which the wealthy could simply trade amongst themselves. Even today, most of the tech entrepreneurs who are speaking out in favor of a UBI don’t want to fund it by raising taxes on themselves— they’re advocating to replace the entire existing social safety net with a meager cash payment.

But the wealthy cannot hold onto power forever. The rich may seem invincible now, but they only have power so long as the state continues to enforce their claims on property. If the institutions of parliamentary democracy and universal suffrage survive the turmoil, the masses will use them to wrest power away from big business. We will use state power to bring society’s resources and machinery into public ownership, so that they can be managed democratically to further the interests of all humanity. Everyone will be provided everything they need— not just to live, but to thrive and pursue their dreams and passions in a world of freedom and abundance. This utopian, Star Trek-like future is called democratic socialism. It is the stage in history when humanity will finally grow out of its infancy.

One thought on “Why Automation Will Kill Capitalism Forever”